The Hawks defeated the Chicago Stags 74-32, WSAD Black Mustangs 61-30 and the WSAD Orange 51-36 in the championship game. The triumphs now have pulled the Hawks’ record to 8-4 for the season to date.

Edlin Dorn was dominant in the tournament – the 6’9 superstar averaged 20 points and 15 rebounds each game. He was supplemented by Keith Westhoelter’s hot-shooting from outside the arc in each game. Gerry Joseph stepped up after a last-minute signing to perform admirably from the point guard spot.

The Hawks have a game tonight at the Fieldhouse at 930pm.

Comments Off on WSAD Invitational Champs! |

The Hawks will travel to Chicago to play in the WSAD Basketball tournament this coming Saturday January 24th, 2009. The Hawks last participated in the WSAD tourney during the 2007 season, winning by 26 points in an exciting game exactly a week after the Super Bowl which the Colts defeated the Bears.

The Hawks are expected to open against the Chicago Stags at 1230pm. The tournament will also feature the WSAD Orange, WSAD Blacks, CISDAA, Madison (Wisc), Detroit Panthers and Nebraska Lincoln teams.

Attendance tends to be in the low hundreds for this event. See you all there!

Comments Off on Indy Hawks at Chicago WSAD Jan 24th |

The Indy Hawks finished with a 1-1 record last Saturday, beating Cetra Pro’s 66-49 and losing to Ameriflo 77-71. The Shootout was a success as everyone involved had fun balling.

The Indy Hawks now have a 5-3 record with a game at the Fieldhouse tomorrow (Jan 14) at 730pm against Starbury’s on the Yellow Court.

The Indy Hawks will also have an open scrimmage against the Butler All-Stars this Friday at 5pm at ISD Caskey Gym. Everyone is welcome to attend and watch.

Comments Off on The Hawk Relay Shootout Results | 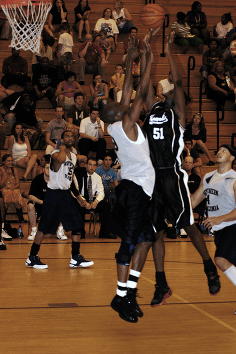 The Indy Hawks’ star post player, 6’9 Edlin Dorn (pictured at right #51) has been named to the 2009 Deaflympics basketball team set to compete in Taipei, Taiwan next September, along with teammate Robert Haney.

Dorn was recently named to the All-USADB tournament and has season averages of 20 ppg and 12 rpg for last year’s 32-7 team.

Haney was chosen the USADB MVP for the 2nd consecutive year in a row – averaging 25 ppg in the National Tournament.

Both are expected to be mainstays during the 2009 basketball season.

Comments Off on Dorn and Haney named to 2009 Deaflympics Team |