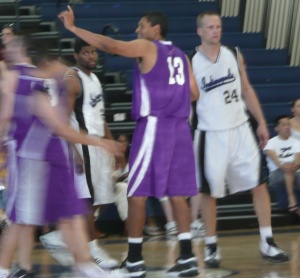 The USADB Championship game between the Indy Hawks and the Arizona Desert Fire was the sort of game one would expect between a young and cocky team against grizzled and experienced veterans.  Prior to meeting in the championship game, the Hawks had turned each of their first three games into routs, running roughshod over the North Shore Cyclones (Mass.) 126-45, Utah Glaciers 95-61, and the California Beavers 82-54.  The AZDF, on the other hand, defeated Chicago WSAD Orange 83-54, New Jersey 89-55 and squeezed past a tough Carolinas squad, 69-62.

The game against the Fire was the Hawks’ 4th time in the past five years, all Hawks victories. The familiarity between both teams were evident in the way both went about their pre-game preparations and strategy – which made a difference in the USADB’s 65th annual championship game held at Hope International University in Irvine, California.

The Hawks opened the first half with a bang, scoring 5 quick points to jump into the lead before AZDF got into the scoring column. Behind the acrobatic Robert Haney, the Hawks were able to control the scoreboard despite AZDF’s obvious strategy – a tight 2-3 zone defense that collapsed on the 6’9 Edlin Dorn every-time the ball was passed into the post. On offense, the Fire milked the clock down to five seconds or less before going for their shots while the Hawks focused on their running game, to mixed results.

Despite being able to put points on the table, the Hawks were loose on their trademarked man to man defense, allowing several Fire players to score from a variety of spots. Unsung 5’5 guard Michael Alvarado came off the AZDF bench to score 10 nifty points (two high-arching 3-pointers) to enable AZDF to stay close as the Hawks went into the locker room 31-24.

In the second half – the fired-up AZDF team came out firing and pulled ahead of the Hawks within 3 minutes, 34-33. From that point onward – the Hawks’ youth began to show – trying to race upcourt to score instead of working the clock with countered plays which led to the Hawks playing catch-up all thruough the second half as the AZDF build a strong and sturdy lead consistently by 8 to 10 points. Despite these roadblocks, the Hawks’ continued to play hard.

In the last minute, all time-outs were gone. Robert Haney, Brian Bippus and Matt Johnson each had 4 fouls and the Hawks were down 7 with just a minute remaining. The fans were openly discussing how the AZDF had dominated the Hawks. However, the Hawks were only starting to wake-up and play basketball.

Following missed free throws by the Fire – the Hawks sprinted downcourt to score quickly. The Fire saw the lead dwindling from 7 to 5 before a Matt Johnsonn 3-pointer at the 18 second mark pulled the Hawks to within 2. After a quick foul and 2 consecutive missed free-throws by AZDF’s Hopwood, Bippus rebounded, faked a handoff to Haney who was doubled tightly, then dribbled upcourt, looking for the open man. Bippus passed it off to Johnson, who faked his man off his fet then drove the baseline. However, two AZDF players came out to push Johnson off-court. Unable to penetrate, Johnson leaped out of bounds and threw a quick pass to Dorn, who was planted underneath the rim. Dorn snatched the pass and with his long arms, quickly dumped it into the basket with 3.2 seconds remaining to score the game-tying basket, which set the gym in pandemonium. The 65-65 regulation score and the Hawks’ comeback within a minute from 7 down only handed momentum to the Indy Hawks.

After a timeout by the AZDF, which allowed the Hawks to regroup and set up their final defense, Haney stole the ball and let the clock run out into overtime. and in the extra session, the Hawks took control with valuable contributions by Onye Davis and Keith Westhoelter off the bench to secure the 79-70 victory. The win gave the Hawks their second consecutive USADB crown for the city and community of Indianapolis.

Robert Haney finished with 39 points and tournament MVP honors along with 7 assists and 6 steals, Dorn had 14 pts and 9 rebounds, Bippus had 10 pts and 5 rebounds, Westhoelter 6, Davis and Johnson 5 apiece for the Hawks.  AZDF had DaSilva 15, Alvarado 14, Hamilton 9, Hopwood and Stultz 7, Torres and Gay 6, Wells 4, Thomas 2.  Indy shot 32% with the AZDF scorching the nets at twice that 65%. 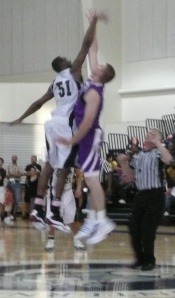 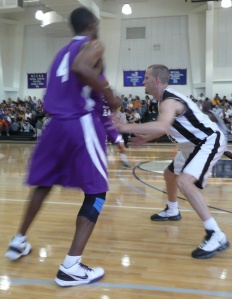 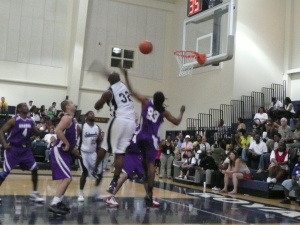 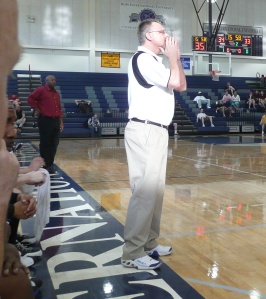 This entry was posted on Friday, April 24th, 2009 at 10:30am04 and is filed under Uncategorized. You can follow any responses to this entry through the RSS 2.0 feed. Both comments and pings are currently closed.