The USA contignent steamrolled national home favorite Poland 91-42 to keep undefeated in the U21 Deaf World Championships. Led by Indy Hawks guard Gabriel Paulone’s 15 on 7 of 10 shooting. Tomorrow, they will play Russia.

Comments Off on U21 Deaf World Championships – Update #6 |

The American contigent easily defeated England, where basketball is not a main or popular sport by the score of 105-9. The Americans had several players score in double figures – led by Kevin Berrigan’s 18. The Americans continue to be undefeated during its first-time with the U21 Deaf World Championship tournament held in Poland. 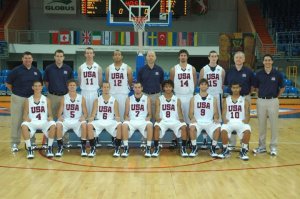 Comments Off on U21 Deaf World Championships – Update #5 |

The Men’s U21 Basketball Team ran by Estonia 100-39 behind Josh sisco and Greg white, who scored 18 points each to lead the Americans. Hoosiers Gabriel Paulone and Tyler Crace had 8 and 7 points respectively. Todd Bonheyo, a rising senior for the MAryland School for the Deaf, recorded a double-double – scoring 10 points and snatching 10 rebounds. On Monday, the Americans will face Great Britian (England).

Comments Off on U21 Deaf World Championships update #4 |

The Men’s U21 team continued their winning ways by dominating the Ukraine team, 96 – 58. The team was led in scoring by Ohio product Greg White with 16 points and 8 rebounds. Hoosiers Gabriel Paulone and Tyler Crace had 10 and 9 points respectively. The victory has propelled the USA further in the tournament and has shown them to be the clear-cut favorites to capture the Gold Medal. 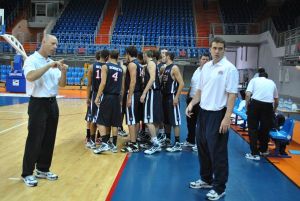 Comments Off on U21 Deaf World Championships – Update #3 | 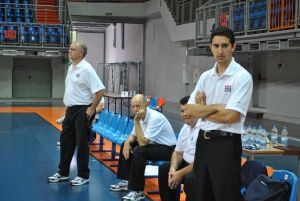 The Men’s U21 basketball team defeated Venezuela quite handidly in the opening game of the tournament, 101-59 in the opening round of the U21 Deaf world Championships in Lubin, Poland.  The game was never close as the men made over 50% of their field goals (35-60) and 505 on their shots beyond the arc, shooting 7 for 16. The team was led in scoring by Maryland Deaf graduate Daniel Fava with 15 points followed by Hoosier Tyler Crace and South Carolina product Josh Sisco with 14 apiece. Fishers resident Gabriel Paulone had 9 points and 4 rebounds.

Comments Off on U21 Deaf World Championships – Update #2 |

The United States of America Deaf Basketball – International announces
that the Selection Committee and Head Coach for each team will select the
top 24 athletes from a pool of applicants, with EACH team to include
12 players and 3 alternates.

Men’s and Women’s World Deaf Basketball Championship will be held at Palermo, Italy during September 2011

PLAYER Try-outs to be held:
Who:  Invited Deaf and hard of hearing female and male basketball players
Where: Indiana School for the Deaf at Indianapolis, Indiana
When:  July 29th to 31st, 2010

In their first dose of international competition as a team, the United States Men’s Under-21 squad started strong but finished flat against Novum Lublin, a basketball club located in Lublin, Poland, squandering a big lead before losing 81-82 at Mosir Lublin Gymnasium. For the Americans, today’s warm-up game was an opportunity to get into game form and build chemistry, something that U.S. National Team Head Coach Keith Westhoelter considers to be of utmost importance. He seemed take this to heart, for all 11 players on the team put in substantial minutes.

In the first fifteen minutes, however, it did not seem as if they needed warming up, for the athleticism of the United States appeared to be too much for the host Rams. Using an effective 1-2-2 press, the Americans forced a number of turnovers and turned them into transition points. By five-minute mark of the second quarter, the U.S. found themselves leading 40-11. However, Novum Lublin used a 16-1 run to close out the half, getting itself back into the game trailing by 14. After intermission, the U.S. could not regain the dominance it experienced in the early phases of the game. Novum Lublin used their height advantage to gradually chip away at the U.S. lead before taking it for the first time with two minutes remaining in the game, in large part due to untimely turnovers committed by the Americans.
“There were times when it didn’t seem as if everyone was on the same page, but that’s to be expected when a team has only had two practices together,” said point guard Kevin Berrigan (Frederick, Md.), who had four points while taking only two shots, but dished out eight assists to go along with five boards and three steals. “However, every time we play together, we continue to get better as a team,” he added. Despite the loss, U.S. coaches did not seem too concerned with the outcome. “It wasn’t about winning or losing tonight,” Westhoelter said afterwards. “It was about everyone getting a feel for one another and preparing for the next ten days. Hopefully the guys will learn from this and use it as a tool as we go for the Gold.”

Leading the U.S. in scoring was 6’4” forward Greg White (Centerville, Ohio), who poured in 16 points to go along with four rebounds. Guard Brandon McMillan (Frederick, Md.) chipped in 12 points and swingmen Gabriel Paulone (Fishers, Ind.) and Raymond Nelson (Riverside, Calif.) each scored 11. 6’6 swingman Tyler Crace of Westfield, Indiana aded 6 points. The U.S. will have one more full practice on Thursday morning and another scrimmage versus a Polish basketball club on Thursday evening before beginning pool play against Venezuela on Friday. (contributed by Colin Whited of Fishers, Indiana)

Comments Off on Deaf U21 World Championships – Scrimmage #1 |

The Indy Hawks
Blog at WordPress.com.